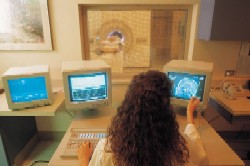 Universe Technical Translation provides software localization. This allows your software to be utlilized by people in many different countries.