Brochures, Slides, Drawings, Presentations, and Manuals in the Language of Your Choice

Our desktop publishing professionals are experienced in copyfitting the target language of your document and are ready to ensure that your documents are delivered in a format that is convenient for you. 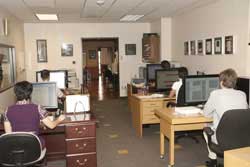 Equipped with state-of-the-art scanners and printers, UNIVERSE is ready to meet your complicated and time-sensitive requirements.